Joshua Kurt "Josh" Hayes (born April 4, 1975 in Gulfport, Mississippi) is a professional motorcycle roadracer who started his road racing career at age 19 and made a quick ascension up through the ranks where he won his first three WERA titles in 1994 and numerous others in the following four years. He turned pro in 1996 and also raced in MotoGP. Riding Suzuki GSX-R motorcycles, Hayes won the 1999 750 SuperSport race at Daytona and finished third in the Formula Extreme class for the season. He won the 2003 AMA 750 SuperStock Championship riding an Attack Suzuki GSX-R750, the 2006 and the 2007 AMA Formula Xtreme Championships on an Erion Honda CBR600RR, and four AMA Superbike Championships on a Yamaha YZF-R1 (2010, 2011, 2012, and 2014). 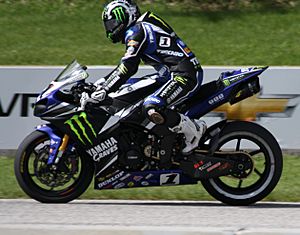 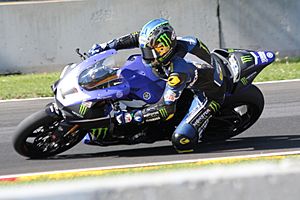 Hayes joined the Yamaha Factory Racing team in 2009 and competed aboard a Yamaha YZF-R1 in the AMA Pro Racing SuperBike Championship, winning seven races en route to second place in the Championship. He also raced a Yamaha YZF-R6 in the Daytona 200.

Hayes won his second consecutive SuperBike Championship in 2011. He captured seven poles, three wins, and nine podium finishes in defending his championship. He only finished off the podium twice over the course of the entire season, and he won the Championship on the final lap of the final race.

Hayes made his MotoGP debut at the 2011 Valencian Grand Prix riding the Tech 3 Yamaha YZR-M1 as a replacement rider for injured countryman Colin Edwards. Hayes led the wet morning warmup session, and then, he went on to finish seventh in the race.

Hayes showed in 2014 that the #4 on his Monster Energy/Graves/Yamaha R1 SuperBike was an omen. On the strength of his 7 race wins and 3 second-place finishes out of 11 races this season, Josh captured his fourth AMA Pro SuperBike Championship. He also won the GEICO Motorcycle Superbike Shootout Championship that same year.

In 2015, Hayes notched 10 Superbike wins during MotoAmerica's inaugural season. He also reached the podium in 16 out of 18 races and earned 5 pole positions. His teammate Cameron Beaubier nipped him by just four points for the 2015 MotoAmerica Superbike title.

In 2016, Hayes finished the MotoAmerica season just six points behind his teammate Beaubier, and it came down to the final race of the season at New Jersey Motorsports Park to decide it all.

Hayes finished fourth in the 2017 MotoAmerica Championship, reaching the podium 8 times, which included a victory at VIRginia International Raceway.

All content from Kiddle encyclopedia articles (including the article images and facts) can be freely used under Attribution-ShareAlike license, unless stated otherwise. Cite this article:
Josh Hayes Facts for Kids. Kiddle Encyclopedia.