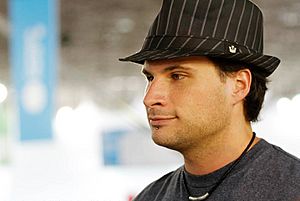 Julien Fourgeaud (25 April 1980 – 6 August 2014) was a French businessman and inventor. He was the digital services product strategist for Finnish video game developer Rovio. His work at the company led to the success of Angry Birds. He later co-founded Scarlet Motors. He also worked for the mobile phone company Nokia. He was born in Cluses, Haute-Savoie.

Fourgeaud died in a BASE jumping accident on 6 August 2014 in Magland. He was 34.

All content from Kiddle encyclopedia articles (including the article images and facts) can be freely used under Attribution-ShareAlike license, unless stated otherwise. Cite this article:
Julien Fourgeaud Facts for Kids. Kiddle Encyclopedia.