In 1956 he started studying theology. 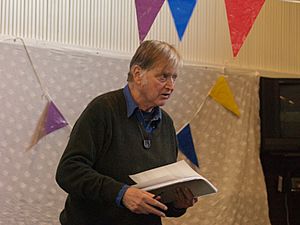 He won the Zilveren Griffel award in 1975 for his book De vreselijk verlegen vogelverschrikker. In 1984 he won the Gouden Griffel award for his book Liefdesverdriet. In the seventies of the twentieth century he was also a member of Het Schrijverscollectief, a group of writers which included Eykman, Willem Wilmink, Hans Dorrestijn, Ries Moonen, Jan Riem and Fetze Pijlman. Together they contributed to television shows such as De Stratemakeropzeeshow and De film van Ome Willem.

In 1986, he published the book De zaak Jan Steen which was the Kinderboekenweekgeschenk during the Boekenweek that year.

The Karel Eykman school in Amstelveen is named after him.

Many of his books were published by Uitgeverij De Harmonie.

All content from Kiddle encyclopedia articles (including the article images and facts) can be freely used under Attribution-ShareAlike license, unless stated otherwise. Cite this article:
Karel Eykman Facts for Kids. Kiddle Encyclopedia.