Until 1935 he was a student and assistant of the founders of Gestalt psychology in Berlin: Max Wertheimer, Wolfgang Köhler and Kurt Koffka. In 1935, exiled by the Nazis, he got an assistantship at Cambridge University with Frederic Bartlett. Later he emigrated to the USA where he was again an assistant of Köhler’s at Swarthmore College. 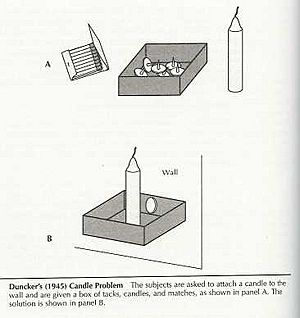 Duncker coined the term functional fixedness in visual perception and problem solving. This describes the difficulties arising from a part of a problem which normally has a fixed function. In the problem, the fixed function must be changed to reach the perception or solution.

In his "candle problem" the situation was defined by the objects: a box of candles, a box of thumb-tacks and a book of matches. The task was to fix the candles on the wall without any additional elements. The difficulty of this problem arises from the functional fixedness of the candle box. It is a container in the problem but must be used as a shelf in the solution.

Other examples of this type of problem are:

All content from Kiddle encyclopedia articles (including the article images and facts) can be freely used under Attribution-ShareAlike license, unless stated otherwise. Cite this article:
Karl Duncker Facts for Kids. Kiddle Encyclopedia.