Karl Harris (21 October 1979 – 3 June 2014) was a three-time British Supersport champion. In 2010 he switched to the British Superstock Championship on a GR Motorsport Aprilia. Harris was killed when racing during the 2014 Isle of Man TT after an incident at Joey's Corner. 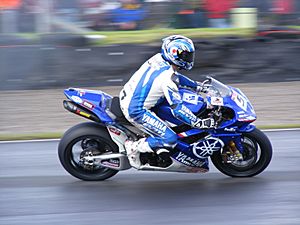 Harris started his career in 1996, moving through the junior ranks to race in the European Superstock Championship, winning the title on the Suzuki GSX-R750, as well as taking in some rounds of World Supersport in 1999, with a best result of 4th.

He returned to the UK in 2001, racing a Suzuki in the British Supersport Championship, which he won. He then graduated to Superbike racing in 2002 on a Suzuki, but this was not a successful season. In 2003 and 2004, he again raced in Supersport for HM Plant Honda, winning the title in both years.

In 2012 Harris made his TT debut for the SMT Honda racing team finishing 21st in the superbike race and 28th in the superstock race whilst also lapping in excess of over 121 mph.

All content from Kiddle encyclopedia articles (including the article images and facts) can be freely used under Attribution-ShareAlike license, unless stated otherwise. Cite this article:
Karl Harris Facts for Kids. Kiddle Encyclopedia.