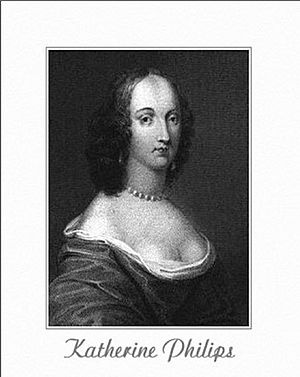 Katherine or Catherine Philips (1 January 1631/2 – 22 June 1664), also known as "The Matchless Orinda", was an Anglo-Welsh royalist poet, translator, and woman of letters. She achieved renown as a translator of Pierre Corneille's Pompée and Horace, and for her editions of poetry after her death. She was highly regarded by many notable later writers, including John Dryden and John Keats, as being influential.

All content from Kiddle encyclopedia articles (including the article images and facts) can be freely used under Attribution-ShareAlike license, unless stated otherwise. Cite this article:
Katherine Philips Facts for Kids. Kiddle Encyclopedia.