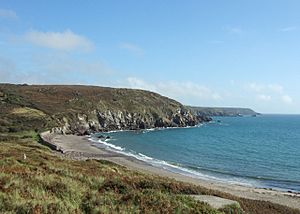 Kennack Sands is a beach and sand-dune system on the east coast of the Lizard Peninsula, Cornwall, England, UK.

The beach is approximately 500 metres (1,600 ft) long and backed by cliffs, Kennack Towans (sand-dune system) and Carn Kennack. Inland is the abandoned Gwendreath Quarry. The beach is used for recreation and divided into two by an outcrop of rocks called the Caerverracks. Kennack Sands has a gentle sloping beach so the tidal range is quite large. At high tide there is still a large amount of beach to make use of but at low tide the beach seems to get a lot bigger. There is a rocky outcrop that splits the beach into two so the beach may be referred to as Kennack Sands west and Kennack Sands East. The rock that splits the beaches is called Caerverracks and the hill above this Carn Kennack. There is a path that runs over Carn Kennack allowing access to the east beach which is a designated nature reserve.

It is a popular site for launching inflatables for underwater diving. Less than 400 metres (1,300 ft) off-shore the depth of water is over 16 metres (52 ft).

The nearest village is Kuggar, 1 kilometre (0.62 mi) inland. There is a car park and café on the western side of the beach and on the road to Kuggar there are caravan and camping sites.

Pill boxes and an anti-tank wall were built on the back of the beach in case of invasion during the Second World War.

All content from Kiddle encyclopedia articles (including the article images and facts) can be freely used under Attribution-ShareAlike license, unless stated otherwise. Cite this article:
Kennack Sands Facts for Kids. Kiddle Encyclopedia.