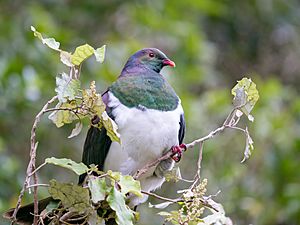 The kererū (Hemiphaga novaeseelandiae) is the only type of pigeon native to New Zealand. It is very big and easy to spot, and its wings make a loud sound when it flies. It is the only still-living New Zealand bird which can eat large fruits whole, and so is important for spreading the seeds of many native trees. Kererū were an important type of food for Māori. There are much fewer kererū now than before the Europeans arrived in New Zealand, mostly because the Europeans brought meat-eating animals like cats, ferrets, stoats, possums, and rats, and cut down a lot of the forest. Because there are not many kererū any more, it is against the law to hunt them.

'Kererū' is the most common name for this bird, but in some parts of the North Island it is called kūkū or kūkupa. Kererū are also called wood pigeon, but they are a different type of bird to the wood pigeon (Columba palumbus) of the Northern Hemisphere.

Kererū are big and generally weigh between 550 and 850 grams. They have a white underbelly and dark green/blue head, shoulders, and wings. The green/blue colour is iridescent, meaning it is shiny and shows lots of different blues, greens, and purples in the sunlight.

All content from Kiddle encyclopedia articles (including the article images and facts) can be freely used under Attribution-ShareAlike license, unless stated otherwise. Cite this article:
Kereru Facts for Kids. Kiddle Encyclopedia.