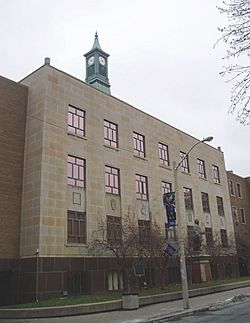 A part of South Kerr Hall

Kerr Hall is a series of four buildings in a square, surrounding Ryerson Community Park, on the campus of Ryerson University in Toronto, Canada. Kerr Hall is on the site of the former Toronto Normal School. All but a portion of the Normal School's front façade was demolished in the late 1950s to enable the construction of:

The current building was built from the early 1960s to 1969 and designed by architect Burwell R. Coon. Until 1963, Kerr Hall surrounded the site of the Toronto Normal School. 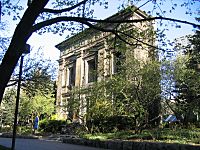 The middle of Kerr Hall is the tree-lined Ryerson Community Park, also known as the Quad.

Not all four of Kerr Hall's buildings connect to each other on all floors.

Google Maps offers indoor maps for all four floors of Kerr Hall, plus the basement. Many room numbers are omitted from the map, and the entire 100 level of Kerr Hall West is also missing.

Google indoor maps provide static floor plans; they can also provide spoken walking directions to selected rooms inside a building. Google Maps can use Wi-Fi trilateration in order to determine a user's position; it can achieve an indoor accuracy of between 5–15 meters in many commercial and institutional buildings.

All content from Kiddle encyclopedia articles (including the article images and facts) can be freely used under Attribution-ShareAlike license, unless stated otherwise. Cite this article:
Kerr Hall Facts for Kids. Kiddle Encyclopedia.