The King Plow Arts Center is a commercial, performing, and visual arts center located on Marietta Street in the Marietta Street Artery district of West Midtown, Atlanta. King Plow is the largest center of its kind in the city. King Plow is also a popular music venue for concerts and live music shows in Atlanta. 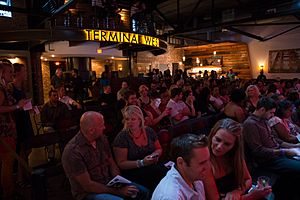 Prior to the construction of the current building in 1902, the Walker-Sims Plow Company operated in buildings on the current site. In that year, Clyde Lanier King and two partners bought the company and renamed it the Atlanta Agricultural Works, in 1906 again to the Atlanta Plow Company and in 1928 to the King Plow Company. In 1936-38 the original plant area was expanded to its present size of 165,000 square feet (15,300 m2). At its zenith the plant employed 300. Sales eventually declined and the factory closed in 1986. In 1990, the owners decided to redevelop the factory into a mixed use arts facility using the historic buildings and provide affordable studios for artists and other creative businesses and individuals.

In early 2013, Terminal West expanded to hold a restaurant titled Stationside that serves lunch Tuesday - Friday and along with dinner any night of a show.

All content from Kiddle encyclopedia articles (including the article images and facts) can be freely used under Attribution-ShareAlike license, unless stated otherwise. Cite this article:
King Plow Arts Center Facts for Kids. Kiddle Encyclopedia.