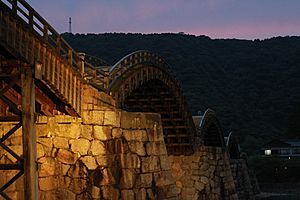 The bridge is lit up every day after sunset. 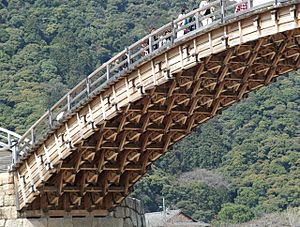 The underside of Kintai Bridge

The Kintai bridge is a historical wooden arch bridge, in the city of Iwakuni, in Yamaguchi Prefecture, Japan. The bridge was built in 1673, spanning the Nishiki River in a series of five wooden arches. The bridge is located on the foot of Mt.Yokoyama, at the top of which lies Iwakuni Castle.

Kikkou Park, which includes the bridge and castle, is a popular tourist destination in Japan, particularly during the Cherry blossom festival in the spring and the autumn color change of the Japanese maples. It was declared a National Treasure in 1922. 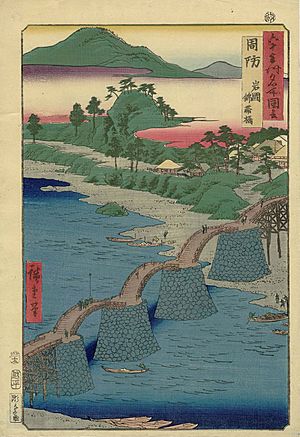 Woodblock print of the bridge 1853

After Iwakuni Castle was completed in 1608 by Kikkawa Hiroie, the first lord of Iwakuni Domain, a series of wooden bridges was built. However, most of them were destroyed by floods several times before the construction of the iconic Kintai Bridge. Afterwards, Kintai Bridge was built by the third lord, Kikkawa Hiroyoshi in 1673. The new stone piers replaced the old wooden ones. Though thought to be flood-proof, the bridge was destroyed by a flood the next year. As a result,the stone piers were redesigned for greater strength, and a special tax was created to maintain the bridge.

The bridge remained intact for 276 years, until washed away again in a flood from typhoon "Kijia" in 1950. It was in a weakened state at the time, as the Japanese had stopped maintaining the bridge during World War II, and because the year before the typhoon, a large amount of gravel was taken by the United States Marine Corps from the river in the area around the bridge to expand the US Marine Corps Air Station's runway, thus weakening the support. 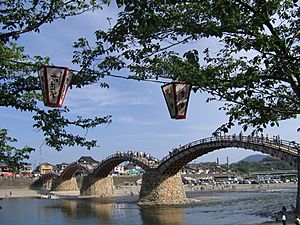 In 1953, the bridge was reconstructed similar to the original, using metal nails made from the same tatara iron used when forging katana to increase its durability. Between 2001 and 2004, all five bridge girders were restored for the first time in 50 years.

The bridge is composed of five sequential wooden arch bridges on four stone piers as well as two wooden piers on the dry riverbed where the bridge begin and ends. Each of the three middle spans is 35.1 meters long, while the two end spans are 34.8 meters for a total length of about 175 meters with a width of 5 meters.

All content from Kiddle encyclopedia articles (including the article images and facts) can be freely used under Attribution-ShareAlike license, unless stated otherwise. Cite this article:
Kintai Bridge Facts for Kids. Kiddle Encyclopedia.