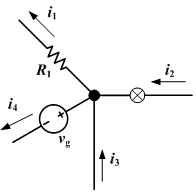 The current entering any junction is equal to the current leaving that junction. i1 + i4 = i2 + i3

Kirchhoff's current law is also known as Kirchhoff's first law and Kirchhoff's junction law. This law states that 'The sum of current into a junction equals the sum of current out of the junction'. This is the same as Kirchhoff's junction law. In a junction, the electric charge's sum preservation law is applied. If the entering value of the current is i2 and i3, this current splits into the current of i1 and i4. Then the equation (i1 + i4 = i2 + i3) is satisfied. The right picture gives an example. This Kirchhoff's first law is that charge is not destroyed or created in a junction point. This is based by an electric charge preservation law. 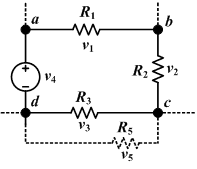 All content from Kiddle encyclopedia articles (including the article images and facts) can be freely used under Attribution-ShareAlike license, unless stated otherwise. Cite this article:
Kirchhoff's circuit laws Facts for Kids. Kiddle Encyclopedia.