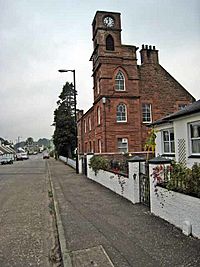 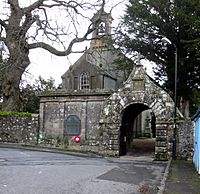 Kirkmichael (Gaelic: Cille Mhìcheil, "the church of St Michael") is a village in South Ayrshire, Scotland, located between Patna, Maybole and Straiton. It was also a civil parish.

Kirkmichael lies three miles east of Maybole and started life as the focus of a well populated rural parish served by its church. Today it is a largely white harled small village set amid the rolling hills of South Ayrshire, a ten-mile drive south of central Ayr.

Its origins date back to the 13th century when John de Gemmelstoun founded a church beside the Dyrock Burn here, which he dedicated to St. Michael. For much of its early life the village was called Kirkmichael of Gemilston, after its founder, but the name was eventually simplified.

The village church dates back to 1787 and is a fairly typical T-plan design intended to provide a large number of seats within a fairly small space, all exposed to the full force of the preacher's oratory.

The surrounding churchyard reflects its much greater age, though the attractive lich gate leading to it only dates back to 1702, according to the inscription on its bell. The lich gate was intended to accommodate mourners at funerals.

Kirkmichael focuses on two intersecting streets, largely occupied by white cottages built for hand-weavers in the 1790s. The most unusual building is the red stone McCosh Hall in Patna Road. This serves as the village hall and in 1898 was gifted to the village by James McCosh, President of Princeton University, whose family came from this part of Ayrshire. At the junction of Patna Road and Straiton Road lies the white-painted Kirkmichael Arms, a long one-storey village inn.

It has a pub, a restaurant and one post office.

Possibly the most surprising facet of modern Kirkmichael was its role as the venue as the Kirkmichael International Guitar Festival. From 1999 until 2005 (except 2004 when the event was not held) for 3 days in May, Kirkmichael became Scotland's guitar village and played host to thousands of music lovers from around the world. They came together for a weekend catering to all musical tastes from folk to flamenco and jazz to rock and roll.

All content from Kiddle encyclopedia articles (including the article images and facts) can be freely used under Attribution-ShareAlike license, unless stated otherwise. Cite this article:
Kirkmichael Facts for Kids. Kiddle Encyclopedia.