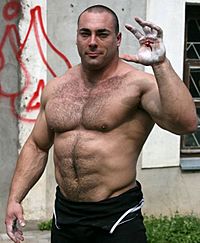 Konstantīns Konstantinovs (Russian: Константи́н Константи́нов, June 6, 1978 – October 28, 2018) was a Latvian-Russian powerlifter. His raw deadlift of 426 kg (939.2 lb), set in 2009, was formerly the raw deadlift world record. It is still the world record for the biggest raw deadlift without a belt in an official competition. He was born in Liepāja, Latvian SSR, Soviet Union.

All content from Kiddle encyclopedia articles (including the article images and facts) can be freely used under Attribution-ShareAlike license, unless stated otherwise. Cite this article:
Konstantīns Konstantinovs Facts for Kids. Kiddle Encyclopedia.