Kosovare Asllani (born 29 July 1989) is a Swedish professional footballer who plays for Spanish Primera División club Real Madrid and the Sweden women's national team. Nicknamed "Kosse" and known as "The Queen" by Real Madrid fans, Asllani is a proficient striker, possessing great speed and technique in her game. Her playing abilities and Balkan heritage from Kosovo , have drawn comparisons with Zlatan Ibrahimović, who captained the Sweden men's national team.

Asllani began her club career with Vimmerby IF and has played in the Damallsvenskan for Linköpings FC and hometown club Kristianstads DFF. In the 2010 season she played in the United States, with Chicago Red Stars of Women's Professional Soccer (WPS). She returned to Sweden to play for Kristianstad, before moving to Paris Saint-Germain, Manchester City and then back to Linköping.

Asllani is of Kosovar-Albanian descent, born in Kristianstad to Kosovar parents who had migrated to Sweden. Asllani grew up playing both football and ice hockey, but chose to focus her talents on football. At the age of 15, Asllani started her career at second division team Vimmerby IF. During her time at Vimmerby, she scored 49 goals in 48 matches, establishing herself as a football prodigy. Former coach Cecilia Wilhelmsson praised Asllani's football technique and fitness. After receiving offers from many clubs, Asllani accepted a move to Damallsvenskan team Linköpings FC in 2007, where she made quick progress.

During Asllani's first season, she generally came off the substitutes' bench early in the games to help her settle into the Damallsvenskan. During the following season, Asllani established herself as a regular starter and was an increasingly valuable member of the squad. In 2009, she helped Linköping win both the Svenska Cupen and the club's first ever Damallsvenskan title. On 4 December 2009 American Women's Professional Soccer (WPS) club Chicago Red Stars confirmed that they had signed Asllani from Linköpings FC.

Asllani spent a single season in the WPS. She was established as a fan's favourite and in the 7th week of the season, Asllani received the WPS Player of the Week award after Chicago Red Stars' defeat of FC Gold Pride. After her season with the Red Stars, Asllani returned to Sweden and Linköpings FC.

Asllani's presence boosted Linköping, especially in the UEFA Women's Champions League. She scored goals against Sparta Praha and Arsenal. However, her season was disrupted by a thigh injury and she departed Linköping at the end of the campaign.

In December 2011, she moved back to her hometown Kristianstad to play with Kristianstads DFF who had finished seventh in the previous year's Damallsvenskan. 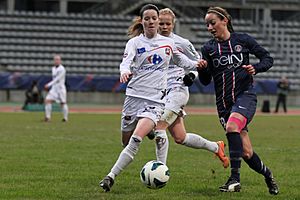 Asllani (R) playing for PSG against FCF Juvisy in December 2012

When Asllani had a month left on her contract with Kristianstads she was subject to a transfer bid from Paris Saint-Germain. Although the teams were in dispute over the size of the transfer fee, Asllani flew to Paris and signed a two-year contract in September 2012, after completing a medical. At PSG Asllani was presented to the media by sporting director Leonardo and player Zlatan Ibrahimović, who declared: "If you want to win you need a Swedish striker." Asllani scored 17 goals in her 19 appearances in the 2012–13 Division 1 Féminine, as PSG finished second in the table behind Lyon. On 4 January 2016, Asllani announced on her Instagram account that she had ended her contract with Paris Saint-Germain, where she had played for three-and-a-half years.

On 22 January 2016, English FA WSL club Manchester City revealed that they had signed Asllani to a two-year contract.

On 10 August 2017, it was announced a two and a half-year contract had been agreed for Asllani to return to Linköpings FC. She departed the club by mutual consent on 15 July 2019.

After her departure from Linköpings FC, Asllani signs with CD Tacón/Real Madrid on 18 July 2019. Upon Real Madrid's purchase of their license, CD Tacón will operate as Real Madrid's women's team starting from 2020, making Asllani the first Galáctica.

Asllani scored 5 goals in 17 league appearances for Tacón in the prematurely ended 2019–20 Primera Iberdrola season. After the rebrand of the team to Real Madrid CFF, she started the season explosively, scoring 8 goals in the first 8 league appearances despite playing in an unfamiliar out-and-out-striker role.

In September 2008 Asllani made her debut for the Swedish national team against Romania, and in 2009 she was called up to represent Sweden in UEFA Women's Euro 2009. Asllani was an important member of the national team during the qualification rounds of the 2011 FIFA Women's World Cup but coach Thomas Dennerby controversially did not select her in the squad sent to Germany for the finals. Football pundits, including Pia Sundhage, the Swedish coach of the United States national team, expressed surprise at Asllani's omission. 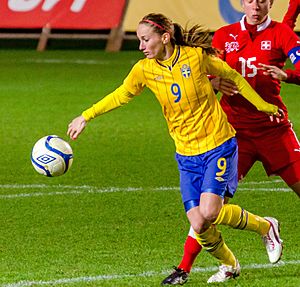 Asllani playing for Sweden in 2012

Dennerby recalled Asllani to the national squad for the 2012 London Olympics.

Asllani played for Sweden at the 2016 Summer Olympics, where the team won a silver medal. She only scored one goal during a penalty shootout against the United States in the quarterfinals, in which Sweden won the shootout 4–3 after being tied 1–1 during extra time.

As of 2017, Asllani has made more than 90 appearances for her national team. She scored in the 5–1 win over Thailand at the 2019 Women's World Cup.

Matches and goals scored at World Cup and Olympic tournaments

Kosovare Asllani has appeared in two FIFA Women's World Cups: Canada 2015, and France 2019. She has also been on the Sweden squad for two Olympic tournaments, in London 2012 and Rio 2016.

Asllani was selected among the penalty takers in both the Quarter-Final and Semi-Final of the 2016 Rio Olympics, when drawn scores after extra time forced penalty kick shoot-outs to decide which side progressed. Though she made her kick in the Quarter-Final against the Americans, her attempt against Brazil in the Semi-Final was saved by Bárbara. Despite the miss, Sweden won the shootout, progressing to the Final where they took home the silver medal.

In the 2019 World Cup, Asllani scored three goals to lead all Swedish players, including her team's first goal of the tournament in the 83rd minute of Sweden's opening match against Chile. After being stretchered off the pitch in the Semi-Final of that tournament, she returned for the third place match and tallied the first goal in a 2–1 victory over England.

Asllani has a tattoo of a black double-headed eagle, symbolising Albania, on her ankle. She also has the words "Stay Strong" tattooed on the inside of her right biceps.

All content from Kiddle encyclopedia articles (including the article images and facts) can be freely used under Attribution-ShareAlike license, unless stated otherwise. Cite this article:
Kosovare Asllani Facts for Kids. Kiddle Encyclopedia.