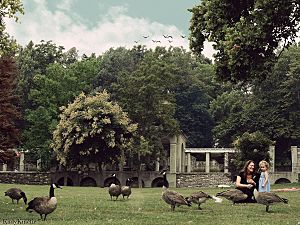 The park is often referred to as St. Joseph's oldest park. While other areas were given for public use earlier, it is true that Krug Park was the first public outing area under the jurisdiction of the board of park commissioners which received public expenditure. As such, it was developed before any other parks. On February 26, 1890, Henry Krug, donated 10 acres (40,000 m2) to the City for use exclusively as a park, on the conditions "that no intoxicating liquors shall ever be kept, sold or disposed of in or upon said premises...nor shall any gambling or gambling devices be permitted." The City was to keep the park in good condition, under police control, and expend annually at least $2,000.00 under the direction of the park commissioners.

Early plans of Krug Park are not available, but from narrative sources it appears that the City quickly spent in excess of the required $2,000.00 per year. As St. Joseph's only developed public space, Krug Park became the "catch-all" for everything that the public seemed to desire. Park Superintendent Rudolph G. Rau seemed particularly fond of flower displays and formally designed beds, and Krug Park boasted many such spectacular displays. It also had at one time a zoo, greenhouses, botanical gardens, gazebos, the Robidoux cabin, a fountain, and a lily pond.

Krug Park was officially open to the public on May 6, 1902. The impressive stone gateway was just nearing completion at that time. The conservatory, which had been constructed at least since 1900, was a very popular spot for park visitors during this period. Alligators were kept in the pond in front of conservatory, and several other exotic animals were housed around the park. Old war cannons were moved to the park, and (as a result of a hoax) so was the so-called "Robidoux cabin." A reporter in need of a story saw an old cabin being torn down, and claimed that it belonged to the town's founder, Joseph Robidoux. As a result, the cabin was moved to Krug Park and maintained for many years.

All content from Kiddle encyclopedia articles (including the article images and facts) can be freely used under Attribution-ShareAlike license, unless stated otherwise. Cite this article:
Krug Park (St. Joseph, Missouri) Facts for Kids. Kiddle Encyclopedia.