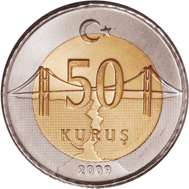 Kuruş, also Qirsh, Ersh, Gersh, Grush and Grosi, are all names for currency denominations in and around the territories formerly part of the Ottoman Empire.

The variation in the name stems from the different languages it is used in (Arabic, Amharic, Hebrew, Turkish and Greek) and the different transcriptions into the Latin alphabet.

In European languages, the kuruş was known as the piastre.

All content from Kiddle encyclopedia articles (including the article images and facts) can be freely used under Attribution-ShareAlike license, unless stated otherwise. Cite this article:
Kuruş Facts for Kids. Kiddle Encyclopedia.