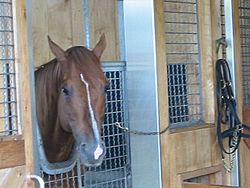 Lammtarra (February 2, 1992 – July 6, 2014) was an unbeaten Thoroughbred racehorse. He won three Group One races in 1995. He was voted the Cartier Three-year-old European Champion Colt. He won the Epsom Derby in record time, the King George VI and Queen Elizabeth Stakes and the Prix de l'Arc de Triomphe. The only other horse to win these races was Mill Reef.

Lammtarra was bred in Kentucky, United States. He was trained in both the U.S. and the United Kingdom.

Lammtarra was first retired to Japan's Arrow Stud. He was later moved to England's Dalham Hall Stud in Newmarket, Suffolk. He died on July 6, 2014, aged 22.

All content from Kiddle encyclopedia articles (including the article images and facts) can be freely used under Attribution-ShareAlike license, unless stated otherwise. Cite this article:
Lammtarra Facts for Kids. Kiddle Encyclopedia.