Laura Elina Österberg Kalmari (née Kalmari; born 27 May 1979) is a Finnish former professional football (soccer) player. Immediately prior to her retirement in early 2012, she had been playing as a forward for American Women's Professional Soccer (WPS) team Sky Blue FC. She is the Finland women's national football team's most capped player.

Österberg Kalmari played in Finnish clubs Puistolan Urheilijat, Malmin Palloseura and HJK before moving to the University of Portland in 2000. Kalmari returned to HJK to play in the inaugural UEFA Women's Cup in 2001–2002. HJK reached the semi-finals, and then she moved back to the United States to play with Boston Renegades in the W-League. In 2002, she moved to Swedish Damallsvenskan club Umeå IK, where she won the UEFA Women's Cup two years in succession. Österberg Kalmari also played for Djurgården/Älvsjö in 2005 and 2006, before moving to AIK in 2007.

With Women's Professional Soccer (WPS) team Sky Blue FC Österberg Kalmari scored seven goals in 33 appearances across the 2010 and 2011 seasons. After the failure of the professional league in America, Österberg Kalmari announced her retirement from playing in April 2012. 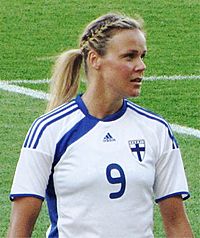 Following her senior debut in March 1996, Österberg Kalmari represented the Finland women's national football team 130 times, scoring 41 goals. She is the all-time leading goalscorer of the national team. In 2005, Österberg Kalmari played in the finals of the 2005 European Championships in North West England. Finland reached the semi-finals, which remains her nation's best achievement in women's football.

After a break from international football which included the birth of her daughter, Österberg Kalmari was recalled to the national team in January 2009 having last played in September 2006. She went on to represent hosts Finland in the 2009 European Championships, where they reached the quarter-finals. 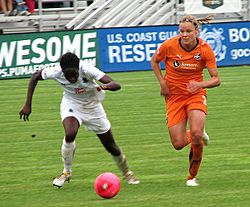 Österberg Kalmari married Niko Österberg in 2007. Their daughter Meja was born in March 2008.

All content from Kiddle encyclopedia articles (including the article images and facts) can be freely used under Attribution-ShareAlike license, unless stated otherwise. Cite this article:
Laura Österberg Kalmari Facts for Kids. Kiddle Encyclopedia.