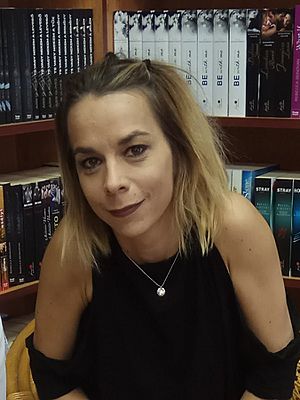 Laura Leiner (born 22 April 1985) is a Hungarian writer who made her publishing debut in 2005. Her most notable work is the series A Szent Johanna gimi (Joan of Arc High School), that she later clarified its fictitious and was not based on her own life.

The first part of Szent Johanna Gimi was released at the Book Festival of Hungary in 2010. Two parts of the series were on the list of Libri's Gold Books in 2011 and one in 2010 She was the number one writer in Bookline's list of March 2012.

Her books are written from the point of view of her readers' age group. The series has a cult following in Hungary.

All content from Kiddle encyclopedia articles (including the article images and facts) can be freely used under Attribution-ShareAlike license, unless stated otherwise. Cite this article:
Laura Leiner Facts for Kids. Kiddle Encyclopedia.