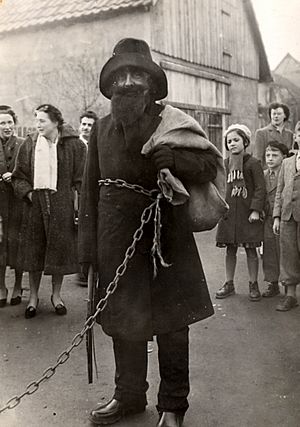 Le Père Fouettard (French for The whipping Father) was a character who went with Saint Nicholas in his rounds at Christmas giving the naughty children the whip while St. Nick gives gifts to the well behaved. He wore a long, dirty, dark colored robe and had a beard that was poorly groomed.

He is known mainly in the Eastern regions of France. In Alsace, Le Père Fouettard is synonymous with the bogeyman.

All content from Kiddle encyclopedia articles (including the article images and facts) can be freely used under Attribution-ShareAlike license, unless stated otherwise. Cite this article:
Le Père Fouettard Facts for Kids. Kiddle Encyclopedia.