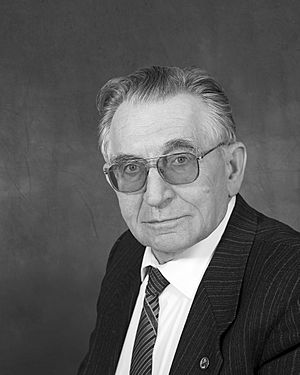 Lev Nikolayevich Korolyov (also Korolev, Russian: Лев Николаевич Королёв; September 6, 1926 – January 5, 2016) was a Soviet-born Russian computer scientist. He was a corresponding member of the USSR Academy of Sciences. He was involved in the development of the first Soviet computers.

Korolyov was born in Podolsk, Russia. He studied at Moscow State University. Korolyov died at his home in Moscow, Russia at the age of 89.

All content from Kiddle encyclopedia articles (including the article images and facts) can be freely used under Attribution-ShareAlike license, unless stated otherwise. Cite this article:
Lev Nikolayevich Korolyov Facts for Kids. Kiddle Encyclopedia.