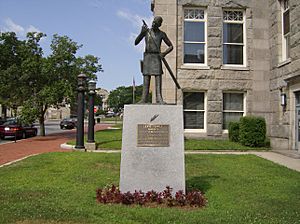 A statue of Lewis Temple in New Bedford, Massachusetts

Lewis Temple (1 October 1800 – 5 May 1854), an American "negro whalecraft maker," blacksmith, abolitionist, and inventor. He was born in slavery in Richmond, Virginia, and moved to the whaling village of New Bedford, Massachusetts during the 1820s, where he worked as a blacksmith. He married Mary Clark in 1820 and they had no children. He is best remembered for the invention of "Temple's Toggle" or "Temple's blood" which was a harpoon toggle tip based upon Eskimo and Indian harpoon tips brought back to New England by Whalers in 1835. After some trials, whalers took to the improved harpoon. Temple never patented his invention which resulted in others copying his work and selling it as their own. Temple did live well, enough to build a larger shop. Unfortunately, due to the negligence of a city construction worker, he fell and was injured. He sued the city and won two thousand dollars, which he never received. He died from his injuries from falling down a sewer in May 1854 he was only 53 and his profits from the invention went largely to paying off his debts.

All content from Kiddle encyclopedia articles (including the article images and facts) can be freely used under Attribution-ShareAlike license, unless stated otherwise. Cite this article:
Lewis Temple Facts for Kids. Kiddle Encyclopedia.