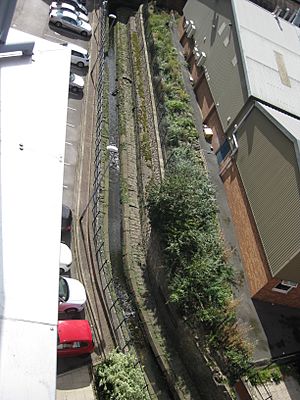 Lady Beck going south from Skinner Lane, with the former Leylands on the right

The Leylands was an area of Leeds just north of the city centre and west of Mabgate. John Cossins' 1775 plan of Leeds shows two fields marked as 'Ley Lands' north of Lady Lane and west of Sheepscar Beck which correspond to the area. An 1881 street map shows it built up and called 'The Leylands', and in 1887 it has a population of 6209. A plan of 1815 shows streets in progress commemorating the (then recent) victories of Nelson, namely Trafalgar Street and Nile Street.

It was between Vicar Lane and North Street (to the West) and Eastgate and Regent Street (to the East) with Lady Lane and Skinner Lane being the South and North boundaries. The main thoroughfare was Bridge Street, named from the Lady Bridge which crossed the Lady Beck, with the beck itself being the Eastern boundary. It was an area of densely packed poor quality housing of workers in the nearby foundries and mills which sprang up in the 19th century, with most built before 1847, described in 1889 as "a dank district in that uninviting city". There were some attempts at improvement at this time with the construction of a Leeds Board school in 1875 (see date on building).

The local church was St Luke's (1841, now demolished) on the corner of Skinner Lane and North Street.

The low rents attracted immigrants, notably Irish, but by the mid-1890s the area was predominantly Jewish: in 1892 of the 1300 houses in the area, 900 were occupied by Jews. A synagogue was built, and the school eventually became entirely Jewish, with three other Jewish schools within the Leylands. In 1901 this area of less than 50 acres had more than 6000 Jews.

The predominant trade amongst the Jewish population was tailoring and the sweatshops of the Leylands became notorious. (The 1901 Census identifies 'Tailoring' as the occupation of 2293 Jews, with 'Tailoress' for 851, many times the next largest 430 for the 'Boot/shoe trade'.). Just north of Skinner Lane there still exists the building of the "Tailors' Machinists & Pressers' Trade Union" which was a specifically Jewish Trade union, the building also being used for Jewish social events. It was to this area and these workers that Montague Burton came to build a clothing factory on Concord Street with decent conditions to establish a business success which later resulted in a larger factory in Harehills.

As the Jewish community prospered, they (and their businesses and places of worship) moved north to Chapeltown and the area was largely cleared in the slum removal programme of 1936/7.

A remaining 19th century building is the Smithfield Hotel on North Street, built about 1860 to serve the cattle market on the opposite side of the road, it then became the front face and offices of the ironworks of Thomas Green & Son which stretched east behind it, producing items from lawnmowers to steamrollers. The garment industry is represented by the 1914 Lyons Works on Templar Lane, which had one of the earliest production lines: it has recently been used as the background for an artwork for Leeds College of Art.

Today, much of the area is used as public car parks for the city centre, but there are some offices, apartments and light industry. It contains the Leeds College of Building and Salvation Army worship and community halls.

All content from Kiddle encyclopedia articles (including the article images and facts) can be freely used under Attribution-ShareAlike license, unless stated otherwise. Cite this article:
Leylands, Leeds Facts for Kids. Kiddle Encyclopedia.