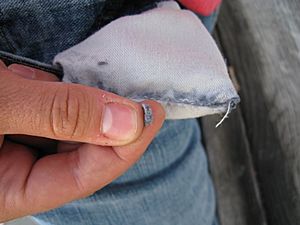 Lint is a collection of clothing fibers and other materials usually on or around clothing.

Pocket lint is lint in the bottom of pockets. Pocket lint is usually made up of, but not limited to detached fabric, dust and paper scraps. In some contexts, pocket lint may also refer to random items in one's pocket.

Many people find that, at the beginning and end of the day, a small lump of fluff has appeared in the navel cavity. People have wondered why this happens for many years. In 2001, Dr. Karl Kruszelnicki of the University of Sydney, Australia, did a survey to find out why this happens. This is what he found out:

All content from Kiddle encyclopedia articles (including the article images and facts) can be freely used under Attribution-ShareAlike license, unless stated otherwise. Cite this article:
Lint (material) Facts for Kids. Kiddle Encyclopedia.