This is a list of African cuisines. A cuisine is a characteristic style of cooking practices and traditions, often associated with a specific culture. The various cuisines of Africa use a combination of locally available fruits, cereal grains and vegetables, as well as milk and meat products. In some parts of the continent, the traditional diet features a preponderance of milk, curd and whey products. The continent's diverse demographic makeup is reflected in the many different eating and drinking habits, dishes, and preparation techniques of its manifold populations. 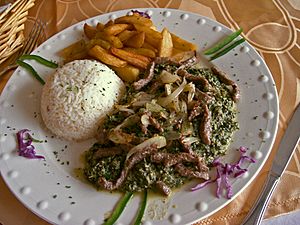 Ndolé is the national dish of Cameroon. 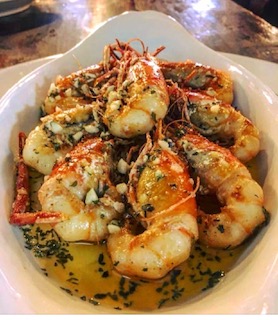 Cossa Cossa is a popular dish in Kisangani in DRC.

Central Africa stretches from the Tibesti Mountains in the north to the vast rainforest basin of the Congo River, the highlands of Kivu and the savana of Katanga.

This region has received culinary influence of the Swahilis (culture that evolved via the combination of Bantu, Yemeni, Omani and Indian cultures) during the East African Slave Trade. Swahili culinary influences can be found in dishes such as: mandanzi, pilaf rice, kachumbari, sambsusa, kuku paka, etc.

Central African cuisine has also been influenced by the Portuguese, by way of the Kongo and Ndongo Kingdoms. Salt fish was introduced following trade in the late 17th century, and the Kikongo term for salt fish, makayabu, comes from the term bacalhau (ba-cal-ha-u).

The Portuguese culinary influence is especially prominent in Angola, Sao Tomé and Equatorial Guinea. Central Africa has also been influenced by the cuisine of the regions East, West and Southern Africa because of their close proximity, e.g. babuté/bobotie is shared with the south, nyama choma with the east and gombos with West Africa. 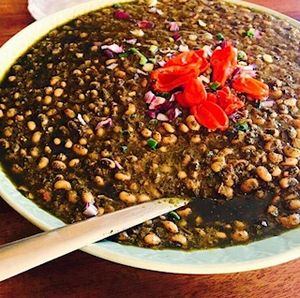 The main ingredients are plantains, cassava, rice, kwanga (cassava dumpling) and yam. Fufu-like starchy foods are usually made from fermented cassava roots, but they can also be made with plantain, corn maize and yam. Fufu is served buffet style with grilled meat, fish, stews, greens and piment . A variety of local ingredients are used while preparing other dishes like spinach stew cooked with tomato, peppers, chillis, onions, and peanut butter. Eastern central Africa is also one of the few regions in Africa that uses potatoes as one of its main bases, since potatoes grow easily in the region.

Cassava plants are also consumed as cooked greens. Groundnut (peanut) stew is also prepared, containing chicken, okra, ginger, and other spices. Beef and chicken are favorite meat dishes, but game meat preparations containing crocodile, elephant, antelope and warthog are also served occasionally. Another favorite is bambara, a porridge of rice, peanut butter and sugar. A jomba is the bundling of foods in fresh green plantain leaves and then cooking them over hot coals or fire. 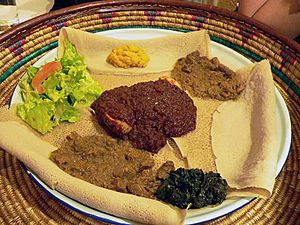 Injera bread and several kinds of wat (stew) are typical of Ethiopian and Eritrean cuisine.

Nile perch are one of the world's largest freshwater fish and a significant food source. It reaches a maximum length of over six feet, weighing up to 440 lbs, although many fish are caught before growing this large. It is widespread throughout much of the Afrotropical realm. 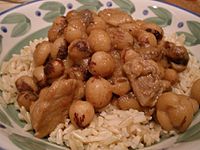 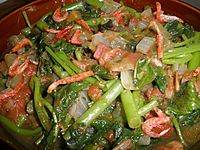 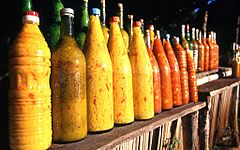 Malagasy cuisine: Two common Madagascan laokas: bambara groundnut and pork (left) and potato leaves with dried shrimp (center), usually served atop rice. On the right are bottles of lemon and mango sauces (achards), which are common in the northwestern coastal regions of Madagascar. 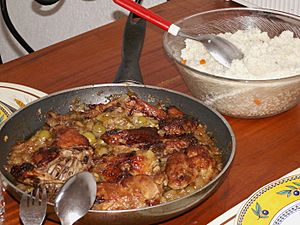 Yassa is a popular dish throughout West Africa prepared with chicken or fish. Chicken yassa is pictured. 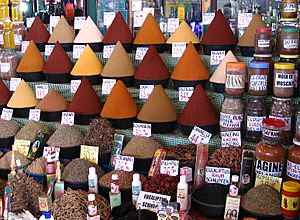 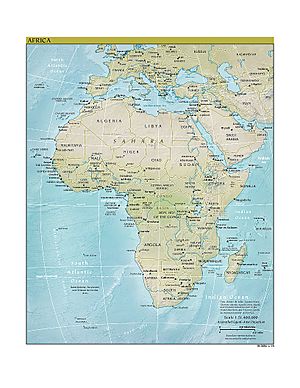 A map of Africa

All content from Kiddle encyclopedia articles (including the article images and facts) can be freely used under Attribution-ShareAlike license, unless stated otherwise. Cite this article:
List of African cuisines Facts for Kids. Kiddle Encyclopedia.