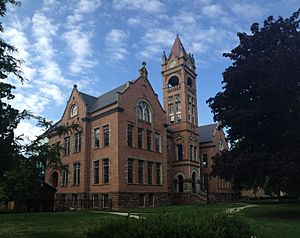 The London Normal School is an Ontario Heritage building located at 165 Elmwood Avenue in the Wortley Village neighbourhood of London, Ontario, Canada.

It was built in 1898-1899 by the architect Francis Heakes. It was the third normal school in Ontario, after the Toronto Normal School and Ottawa Normal School. The building is a mixture of classical, Romanesque, and Gothic revival architecture, as was typical of High Victorian Gothic style.

Classes for teachers in training began on February 1, 1900. By the 1960s, teacher training took place at Elborn College and Althouse College (now the University of Western Ontario Faculty of Education). In 1963, the Normal School became the headquarters of the London Board of Education. In 1986, it became the Monsignor Feeney Centre for Catholic Education within the London District Catholic School Board.

The Catholic School Board moved to a new building in 2005 and the Normal School has been vacant since that time. It is currently the headquarters for the YMCA of Southwestern Ontario.

All content from Kiddle encyclopedia articles (including the article images and facts) can be freely used under Attribution-ShareAlike license, unless stated otherwise. Cite this article:
London Normal School Facts for Kids. Kiddle Encyclopedia.