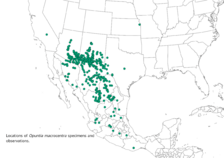 Distribution of Opuntia macrocentra in the United States and Mexico.

This cacti is a slow growing perennial that inhabits a wide range of soil substrates and habitat types. It can be found below the elevation of 5000 ft in areas of sandy desert flats, rocky hills, or valley grasslands.

Opuntia macrocentra is an upright spreading shrub, usually growing from 30–60 centimetres (1–2 ft) tall. Individuals occasionally reach 1 metre (1 yard) in height. The stem is blue-gray, blue-green, or purplish in color. The purple pad color is the most intense at the edges of the pad or around the areoles. The purple color comes from the production of a betalain (betacyanin) pigment that becomes more evident as the plant is stressed by drought or cold.

The cactus consists of smooth obovate to orbicular shaped pads that are connected to each other by the bottom edge or pad margin. Each pad is from 10–20 centimetres (4–8 in) in width and 10–20 centimetres (4–8 in) in length, but is usually wider than it is long. The areoles, highly reduced branch structures from which spines and glochids grow, are dark in color and can be found arranged in diagonal rows on the midstem segment.

Flowers of Opuntia macrocentra are large sturdy flowers of bright colors. They consist of yellow petals with red lower portions forming a bright red center. The visible internal reproductive structures are pale yellow to cream in color. This cactus produces flowers in spring, usually March through June. The flowers open in the midmorning, close at night and do not reopen.

If the flower is pollinated, the cactus will produce small oval shaped fruits ranging in color from bright red to dull purple when ripe. The fruit produced is succulent and approximately half the size of the flower, from 2.5 to 4.0 centimetres (1 to 1 5⁄8 in) in length. Each fruit has between 12-16 areoles. The rind of the fruit is purple and the inner pulp and juices are light purple to clear in color. The fruit contains flattened, tan seeds that are less than approximately 4 millimetres (5⁄32 in) in length with a broad notch on one side and prominent ridge.

Because of its striking stem and flower color the Opuntia macrocentra cactus is cultivated as an ornamental plant for drought tolerant and native plant gardens, and as a potted plant.

Like many other cacti in the genus Opuntia, the fruit produced by Opuntia macrocentra is edible.

Collection of this cactus, and its fruit, is restricted in some areas for conservation needs.

All content from Kiddle encyclopedia articles (including the article images and facts) can be freely used under Attribution-ShareAlike license, unless stated otherwise. Cite this article:
Long-spined purplish prickly pear Facts for Kids. Kiddle Encyclopedia.