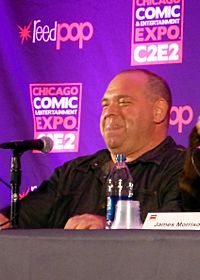 Louis Lombardi Jr. (born January 17, 1968) is an American actor. He is known for his roles as Edgar Stiles in the Fox series 24 and Skip Lipari in the HBO series The Sopranos. His other television work includes Fantasy Island, Mob City, Entourage, Heroes and CSI.

Lombardi was born in The Bronx, New York City.

All content from Kiddle encyclopedia articles (including the article images and facts) can be freely used under Attribution-ShareAlike license, unless stated otherwise. Cite this article:
Louis Lombardi Facts for Kids. Kiddle Encyclopedia.