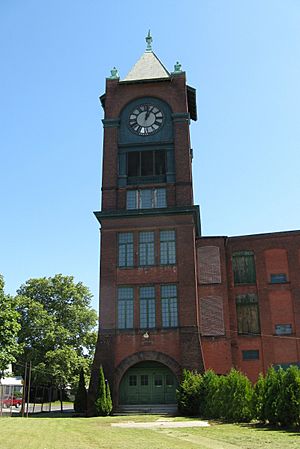 Ludlow Mills ceased operation in the 1960s and the building, although occupied by various tenants since, has deteriorated. In late 2011, it was announced that the complex had been purchased by WestMass Area Development Corporation for $7 million. The company plans to sell some of the space to HealthSouth Rehabilitation Hospital and some buildings to WinnDevelopment for senior housing.

All content from Kiddle encyclopedia articles (including the article images and facts) can be freely used under Attribution-ShareAlike license, unless stated otherwise. Cite this article:
Ludlow Clock Tower Facts for Kids. Kiddle Encyclopedia.