Luigi Russolo (30 April 1883 – 4 February 1947) was a painter and musician from Italy. He was part of the Futurism movement and built his own musical instruments. His instruments were destroyed in World War II in Paris, because the Germans bombed the city, others have simply disappeared. 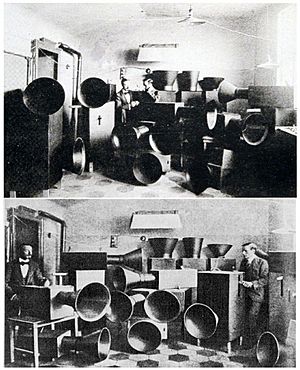 All content from Kiddle encyclopedia articles (including the article images and facts) can be freely used under Attribution-ShareAlike license, unless stated otherwise. Cite this article:
Luigi Russolo Facts for Kids. Kiddle Encyclopedia.