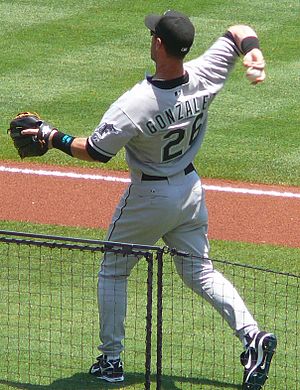 Luis Emilio Gonzalez (born September 3, 1967 in Tampa, Florida) is a retired American Major League Baseball (MLB) outfielder. He had his greatest success with the Arizona Diamondbacks, becoming a star in 2001. He got the hit that won the World Series for the Diamondbacks that year.

In 2010, it was announced that Gonzalez would be the first Diamondbacks player to have his jersey number (20) retired.

All content from Kiddle encyclopedia articles (including the article images and facts) can be freely used under Attribution-ShareAlike license, unless stated otherwise. Cite this article:
Luis Gonzalez (outfielder) Facts for Kids. Kiddle Encyclopedia.