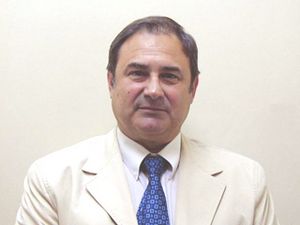 Luis Lusquiños (27 November 1951 – 17 June 2017) was an Argentine politician. He was born in the San Luis Province. He had the highest number of absences in the 2005-2009 period. He was appointed Chief of the Cabinet of Ministers during the brief presidency of Adolfo Rodríguez Saá.

All content from Kiddle encyclopedia articles (including the article images and facts) can be freely used under Attribution-ShareAlike license, unless stated otherwise. Cite this article:
Luis Lusquiños Facts for Kids. Kiddle Encyclopedia.