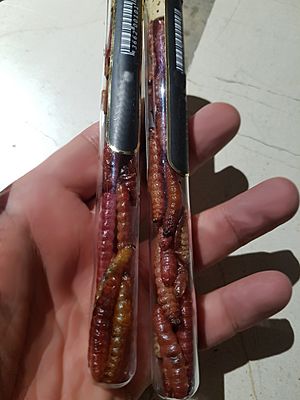 Aegiale hesperiaris is found usually in regions of Central Mexico, on the leaves of Family Agavaceae plants, such as: Agave tequilana and Agave americana (maguey). They are not found on cacti, as is often erroneously reported. Aegiale hesperiaris butterflies deposit their eggs at the heart of the leaves of agaves. The larvae then eat the flesh of the agave stems and roots, sometimes boring out the agave completely.

The red maguey worms are known as chilocuiles, chinicuiles or tecoles, and are the larvae of the moth Comadia redtenbacheri. These infest the core and roots of the maguey plant, often in a collective mass. Along with agave snout weevil larvae (mezcal worm), red maguey worms are one of the types of gusanos found in bottles of mezcal liquor from the Mexican state of Oaxaca. 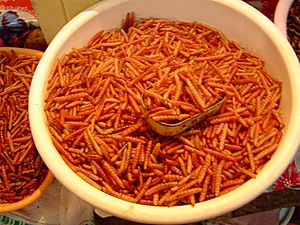 Chinicuiles for sale at a Mexican market

When fully mature, these caterpillars appear fleshy-red and can measure up to 65 mm (2.6 in). They are considered a highly nutritious delicacy in Mexican cuisine. One 100-gram serving contains over 650 calories, or the equivalent of two plates of rice. While they are sometimes eaten alive and raw, they are also considered delicious deep fried or braised, seasoned with salt, lime, and a spicy sauce, and served in a tortilla.

All content from Kiddle encyclopedia articles (including the article images and facts) can be freely used under Attribution-ShareAlike license, unless stated otherwise. Cite this article:
Maguey worm Facts for Kids. Kiddle Encyclopedia.