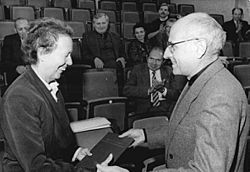 Manfred Wekwerth (né Weckwerth; 3 December 1929 – 16 July 2014) was a German theatre and movie director and writer. He was the director of the Berliner Ensemble theatre from 1977 to 1991. He was also an unofficial worker for East Germany's Stasi from 1965 until the reunification.

Wekwerth was born in Köthen, Saxony-Anhalt. He was married to Renate Richter until his death. They had one child.

All content from Kiddle encyclopedia articles (including the article images and facts) can be freely used under Attribution-ShareAlike license, unless stated otherwise. Cite this article:
Manfred Wekwerth Facts for Kids. Kiddle Encyclopedia.