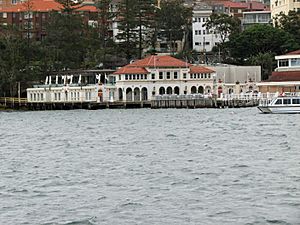 The Manly Cove Pavilion is a heritage-listed former dressing pavilion and amenities block and now public amenities and restaurant at West Esplanade, Manly, Northern Beaches Council, New South Wales, Australia. The property is owned by Roads & Maritime Services, an agency of the Government of New South Wales. It was added to the New South Wales State Heritage Register on 18 April 2000. 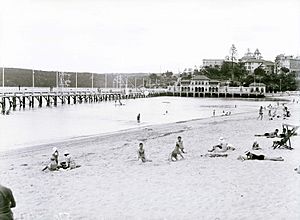 Historic image of the pavilion

Built during the interwar period when Manly was a favourite and fashionable seaside resort. 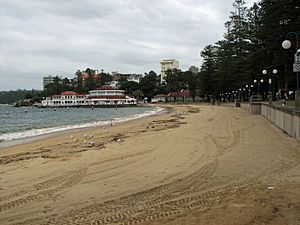 Pavilion walls have decorative tile inlays using burnt orange and ultramarine ceramic tiles. A Greek key motif pattern is surmounted by semi- circular tiles which is in turn surmounted by ceramic decoration in scrolls and by urns.

There is a strong Spanish influence throughout. The toilet block is of the same period. Special elements include the tile inlay bearing the letter "M", the floral motif in cornice decoration, original tiling to walls and the timber pagoda-style entry.

As at 15 June 1998, it was in a good condition. Largely intact exterior retaining the ambience of the interwar Mediterranean style.

As at 12 June 1998, it was one of the few remaining harbour pavilion structures of this period and style in Sydney.

Manly Cove Pavilion was listed on the New South Wales State Heritage Register on 18 April 2000 having satisfied the following criteria.

For its associations with the early 20th century developments of the Manly seaside resort.

The sandstone pillar is a relic from past maritime activity and is evidence of Sydney Harbour's nautical development and early evidence of interest in retaining and re-using old buildings.

As an intact example of the interwar Mediterranean style.

One of few remaining harbour pavilion structures of this period and style in Sydney.

All content from Kiddle encyclopedia articles (including the article images and facts) can be freely used under Attribution-ShareAlike license, unless stated otherwise. Cite this article:
Manly Cove Pavilion Facts for Kids. Kiddle Encyclopedia.