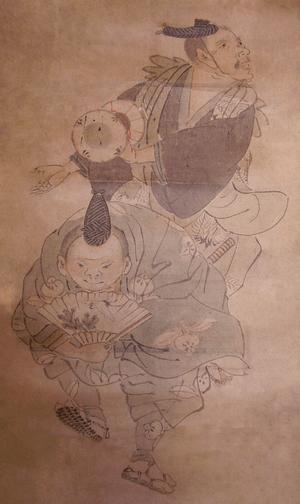 A painting of a pair of manzai comedy actors

Manzai (漫才code: ja is deprecated ) is a traditional kind of Japanese comedy. Manzai is a special kind of stand-up comedy. It is both dialogue and performance.

A comedy team brings together a straight man (tsukkomi) who feeds punchlines to a funny man (boke). A pair of comedians with a special back-and-forth style is called kakeai manzai.

The history of manzai began in the Nara period.

In the Edo period, the traditional dialogue was performed on stage.

In modern times, manzai performances are televised in Japan.

In Japan's past, traditional manzai performers would go from house to house in the New Year's season. They would sing songs and perform good-luck dances in return for a small amount of rice or money.

All content from Kiddle encyclopedia articles (including the article images and facts) can be freely used under Attribution-ShareAlike license, unless stated otherwise. Cite this article:
Manzai Facts for Kids. Kiddle Encyclopedia.