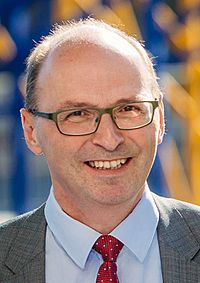 Marc Chardonnens (1960 – 6 April 2020) was a Swiss government official. He worked at the Federal Office for Environmental Protection from 1987 to 2004, then at the Federal Office for the Environment, Forests and Landscape. In 2004, he was appointed as head of the environmental department of the Canton of Fribourg. He chaired the conférence des chefs des services de la protection de l'environnement from 2011 to 2015.

On 27 January 2016, the Federal Council elected him Director of the Federal Office for the Environment. He took office on 11 April 2016, and resigned in late January 2020.

All content from Kiddle encyclopedia articles (including the article images and facts) can be freely used under Attribution-ShareAlike license, unless stated otherwise. Cite this article:
Marc Chardonnens Facts for Kids. Kiddle Encyclopedia.