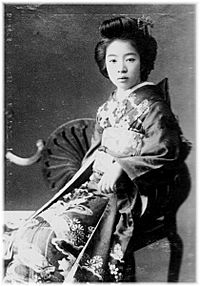 Mari Mori was born in Hongō, Tokyo. Her father was novelist Mori Ōgai.

Mori won the Japan Essayist Club Award in 1957 for a collection of essays called My Father's Hat. She began a movement of writing about male homosexual passion (tanbi shousetsu, literally "aesthetic novels") in 1961 with A Lovers' Forest, 恋人たちの森 (koibito tachi no moricode: ja is deprecated ), which won the Tamura Toshiko Prize. Later works include I Don't Go on Sundays (1961) and The Bed of Dead Leaves (1962).

She was greatly influenced by her father; in A Lover's Forest, the older man can be seen as imbued with the same virtues and honor as she saw in her father. An older man and younger boy are trademarks of Mori Mari's work. The older man is extremely rich, powerful, wise, and spoils the younger boy. In The Lover's Forest, for example, the older man, Guido, is 38 or so, and Paulo is 17 or 18. (However, he is not yet 19, the age that Mori was when her father died.) Paulo is extraordinarily beautiful, prone to lounge lazily, and has a lack of willpower in all but the field of his pleasure. (Guido dies when Paolo is 19, and Paulo subsequently falls in love with a man who's been waiting in the wings, another one just like Guido.)

In 1975 her The Room Filled with Sweet Honey (甘い蜜の部屋code: ja is deprecated , Amai Mitsu no Heya) won the 3rd Izumi Kyōka Prize for Literature.

Her first husband was Tamaki Yamada, whom she married in 1919 and divorced in 1927. Her second husband was Akira Sato 佐藤彰.

All content from Kiddle encyclopedia articles (including the article images and facts) can be freely used under Attribution-ShareAlike license, unless stated otherwise. Cite this article:
Mari Mori Facts for Kids. Kiddle Encyclopedia.