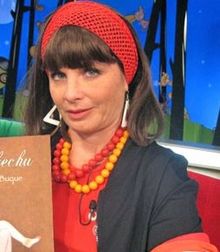 Briski was born in Córdoba, Argentina. She was married to Hernán Ventura from 1988 until her death in 2014. They had one son, Pedro Briski. Briski died from lung cancer and breast cancer in Buenos Aires, Argentina, aged 48. She was of Jewish descent.

All content from Kiddle encyclopedia articles (including the article images and facts) can be freely used under Attribution-ShareAlike license, unless stated otherwise. Cite this article:
Mariana Briski Facts for Kids. Kiddle Encyclopedia.