Marika Rökk ( born Marie Karoline Rökk, 3 November 1913 – 16 May 2004) was a Hungarian dancer, singer and actress who gained prominence in German films in the Nazi era. She resumed her career in 1947 and was one of Europe's most famous operetta singers, performing onstage until 1986.

Marie Karoline Rökk was born in 1913 in Cairo, Egypt, the daughter of Hungarian architect and contractor Eduard Rökk and his wife, Maria Karoline Charlotte (born Karoly) Rökk. She spent her childhood in Budapest, but in 1924 her family moved to Paris where her father had been contractually engaged. Here she learned to dance and starred with the Hoffmann Girls at the Moulin Rouge cabaret.

After a tour that led her to Broadway she continued her dance training in the United States, where she worked with Ned Wayburn. In 1929 she returned to Europe and the next year acted in her first film, Why Sailors Leave Home, a British comedy directed by Monty Banks, starring Leslie Fuller.

Early Technicolor films such as Becky Sharp (1935), The Garden of Allah (1936), Nothing Sacred (1937), and A Star Is Born (1937) made him realize that Hollywood feature films presented a threat to Germany's internal market and that Hollywood's dominance of colour and musical film technology should be matched, at least if Germany was serious about engaging in a cultural war with the U.S. and Britain. 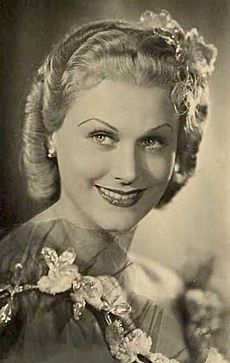 As an acclaimed revue dancer on numerous European stages, Rökk was selected as the ideal candidate to be groomed and promoted as this new type of star and in 1934 was offered a two-year contract with UFA, where she became one of the most prolific film stars of the time. Rökk's German film debut was Leichte Kavallerie (Light Cavalry) (1935, Werner Hochbaum) with Heinz von Cleve. The film made her a sensation overnight.

It was the first of a series of modern escapist, lightweight operettas and glittering revue-style entertainments which quickly made Rökk one of Germany's most popular actresses. These films were clearly modeled on the successful formula of the black-and-white and Technicolor musical films being produced by American film studios RKO, Metro-Goldwyn-Mayer and 20th Century Fox in the 1930s and 1940s.

She had the technical skill and glamour to carry off the formulaic plots and dialogue and provide German audiences with a home grown star to rival the popular American actresses. Der Bettelstudent and Gasparone, followed by Hello Janine! in 1939, all starred her together with Johannes Heesters and established them as the "dream couple" of the musical comedy genre. In her appearances she cultivated her magyar accent conveying a notion of "paprika" exoticism. Her films, which were not overtly political, were also popular in wider parts of Europe.

With a double role in Kora Terry, a 1940 film directed by her future husband Georg Jacoby, she reached new heights. By simultaneously impersonating dutiful and evil twin sisters, Rökk was able to showcase her range of theatrical talent, performing in several dance interludes which were quite risqué for that time. In the same year, she appeared in the propaganda film Wunschkonzert by Eduard von Borsody (as herself), followed by her performance in Georg Jacoby's lavish Women Are Better Diplomats (Frauen sind doch bessere Diplomaten, UFA's first Agfacolor motion picture) in 1941, together with Willy Fritsch.

She reached the peak of her career in 1944, with the star role in The Woman of My Dreams, a lavishly enacted musical colour film again directed by Jacoby. Though few of her movies featured overt Nazi propaganda, she fulfilled her mission to exemplify a leading woman in the Third Reich and to entertain the German people throughout World War II as intended by Goebbels. After the war, she initially was banned professionally (Berufsverbot) but was rehabilitated in 1947 and was able to continue her movie career in West Germany and Austria.

In 1948 she was among the first recipients of the German Bambi media award. Rökk became one of Europe's most famous operetta singers, performing onstage until 1986. After her husband Georg Jacoby had died in 1964, she was married to the Hungarian actor Fred Raul from 1968 until his death in 1985. She is the mother of actress Gabriele Jacoby [de].

All content from Kiddle encyclopedia articles (including the article images and facts) can be freely used under Attribution-ShareAlike license, unless stated otherwise. Cite this article:
Marika Rökk Facts for Kids. Kiddle Encyclopedia.