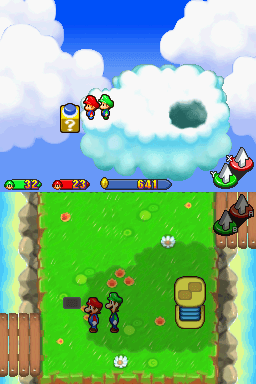 A screenshot of Partners in Time. The Baby Mario Brothers are being controlled on the top screen, while the older ones are shown on the bottom

In this game, Peach goes with two other Toads in a time machine, but she never returns. Whenever the machine returns, a green alien comes out of it. After they beat it, Mario and Luigi go to various places in the past.