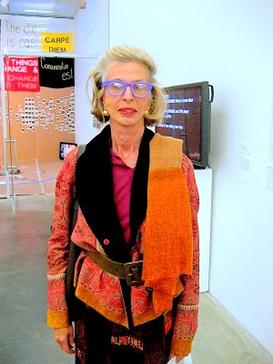 Baroness Marion Lambert (Maron von Vries; 1943 – 28 May 2016) was a Belgian-born Swiss art collector and philanthropist. She was the wife of Baron Philippe Lambert of the Bank Brussels Lambert banking dynasty. She was described as "one of the first collectors and patrons of contemporary photography". In a November 2004, she sold her entire collection of about 300 photographs mostly from the 1980s, entitled Veronica's Revenge, at Phillips de Pury in Chelsea, New York for a total of $9.2 million.

All content from Kiddle encyclopedia articles (including the article images and facts) can be freely used under Attribution-ShareAlike license, unless stated otherwise. Cite this article:
Marion Lambert Facts for Kids. Kiddle Encyclopedia.