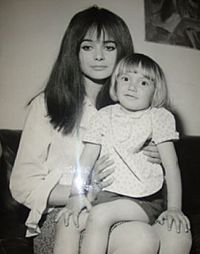 Marisa Anna Solinas (30 May 1939 – 13 February 2019), best known as Marisa Solinas, was an Italian actress and singer-songwriter. She was born in Genoa. She starred in one of the four episodes of Boccaccio '70; the same year she appeared in Bernardo Bertolucci's movie debut, La commare secca and acted on stage in Fogli d'album.

She was also a singer, and published two albums and several singles, one of these released by La voce del padrone.

All content from Kiddle encyclopedia articles (including the article images and facts) can be freely used under Attribution-ShareAlike license, unless stated otherwise. Cite this article:
Marisa Solinas Facts for Kids. Kiddle Encyclopedia.