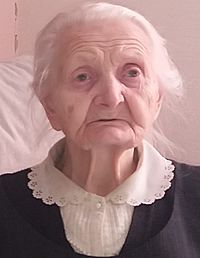 Mariya Shtepa (Ukrainian: Марія Степанівна Штепа, 13 March 1925 — 1 June 2020) was an Ukrainian writer. She was involved in the Ukrainian War of Independence. In 1942 she became a member of the Organization of Ukrainian Nationalists.

On 22 August 2016 she was awarded the Order of Princess Olga of the III degree by the Ukrainian president President Petro Poroshenko.

All content from Kiddle encyclopedia articles (including the article images and facts) can be freely used under Attribution-ShareAlike license, unless stated otherwise. Cite this article:
Mariya Shtepa Facts for Kids. Kiddle Encyclopedia.