Mark Lee Colbourne MBE (born 9 November 1969) is a former Welsh paralympic-cyclist, who competed for both Wales and Great Britain.

Colbourne was born on 9 November 1969 in Tredegar, Monmouthshire, Wales. He played volleyball at international level for Wales between 1990 and 1993.

He broke his back in 2009 after falling 35 feet (11 m) when forced into an emergency landing whilst paragliding.

Following his accident Colbourne began cycling through Disability Sport Wales. He competes in the C1 classification for riders on upright bikes with the most severe disability. He trained with disabled cycling coach Neil Smith at the Newport Velodrome and made his first appearance in a track race in May 2010 at the Wales Grand Prix.

In 2011 he won his first UCI Para-Cycling World Cup medals. He took bronze in the C1 time trail in Segovia, Spain at his debut at World Cup level. At the round in Baie-Comeau, Canada, he won the silver medal in the same event behind Juan Jose Mendez Fernandez of Spain. His first World Championship medal was a silver at the 2011 UCI Para-Cycling Road World Championships held in Roskilde, Denmark. 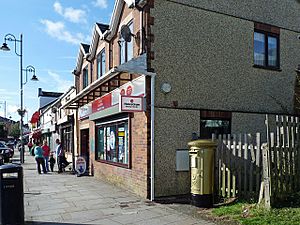 He was selected as part of the cycling team for Great Britain at the 2012 Summer Paralympics. On 30 August 2012 Colbourne won a silver medal and Great Britain's first medal of the 2012 Paralympics, in the C1-3 1 km time trial. On 31 August 2012 he won a gold medal in the C1 3 km individual pursuit after breaking the world record in both the qualification round and the final. He is scheduled to compete in two road cycling events; the C1 road time trial, on 5 September; and the C1-3 road race on 6 September.

Colbourne was appointed Member of the Order of the British Empire (MBE) in the 2013 New Year Honours for services to cycling. In August 2013 Colbourne announced his retirement from para-cycling.

All content from Kiddle encyclopedia articles (including the article images and facts) can be freely used under Attribution-ShareAlike license, unless stated otherwise. Cite this article:
Mark Colbourne Facts for Kids. Kiddle Encyclopedia.