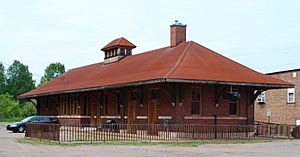 This newer depot, located across Gold Street, replaced the earlier structure in 1922.

The original Negaunee depot burned in 1879. This Negaunee depot was built in 1884 by the Marquette and Western Railroad as a freight and passenger depot. After only a year of service, the entire line was bought by a competitor, the Marquette, Houghton and Ontonagon Railroad. The structure was used as the main freight and passenger depot in Negaunee until it was replaced with a newer structure in 1922. In 1912 it was moved a short distance across the railroad tracks to the location it now stands. The structure was used by the Duluth, South Shore and Atlantic Railway as offices, warehouse space, and a freight depot until 1965. The station has recently been converted into an artist's studio.

The depot is a one-story rectangular frame structure. It has Swiss-inspired vertical board and batten siding, gable and under-eaves trim, along with bracketing and scalloped bottom. The Stick Style depot is largely intact, and reflects Negaunee's growth in the late 19th century due to the iron mining industry.

All content from Kiddle encyclopedia articles (including the article images and facts) can be freely used under Attribution-ShareAlike license, unless stated otherwise. Cite this article:
Marquette and Western Railroad Negaunee Freight Depot Facts for Kids. Kiddle Encyclopedia.