The Marshfield Central Avenue Historic District is part of the old downtown of Marshfield, Wisconsin. The original wooden downtown burned in a huge fire in 1887. Some of the brick buildings built immediately after the fire still stand - especially near the railroad. Other buildings were added later, and the district includes some off Central, like the old city hall and the depot.

Marshfield was quiet forest until 1872. In that year the Wisconsin Central Railroad cleared a path up through the woods to lay rails, choosing a fairly easy spot to cross the low ridge that runs from north of Marshfield to Neillsville - a spot that would become the city of Marshfield. Anticipating railroad workers and later commerce, Louis and Frank Rivers built a rough two-room hotel/tavern/store out of logs in a clearing just north of the right-of-way, on the spot that is now the parking lot behind Hudson's. This crude structure among the stumps was the first building in what would become Marshfield.

The town grew fast. It was platted in 1875, with streets aligned with the railroad rather than the points of the compass. (The early prominence of the railroad is why Central Avenue was laid out running southwest to northeast.) By 1875 the town had 22 wooden buildings. In 1878 William and Charles Upham built the town's first sawmill and a general store. In 1883 Marshfield was incorporated as a city. By 1885, the population was nearly 2000. To his sawmill, Upham had added a planing mill, a furniture factory, and a flour and feed mill. Other businesses had sprung up selling groceries, ready-made clothes, crockery, jewelry, beer, fresh-baked bread, furniture, and coffins.

The main business of that early railroad was transporting lumber from the surrounding forests and from forests to the north. Upham's sawmill cut some of the lumber into boards and shingles. Naturally, many buildings in the new city were built of wood; Central Avenue was lined with frame stores with boomtown fronts and wooden cornices. The street itself was dirt/mud/dust, but wooden boardwalks ran in front of the stores. Wood was plentiful, cheap, and quick to build with, but also flammable.

On June 27, 1887 a fire started in the Upham plant just south of the tracks. The day was hot and windy, the fire got into Upham's piles of drying wood, and the limited firefighting tools were no match for it. The fire engulfed Upham's factory complex. The sawmill was fed from a millpond where Miller Park now stands, and even the logs floating there caught fire. The fire destroyed the railroad depot, then started down the lines of wooden buildings on Central Avenue. Men tried dynamiting a few stores to create a break in the fuel, but the fire swept through the rubble and jumped the gaps. By the time it burned itself out, every commercial building in town except one had been reduced to ashes. No lives were lost, but it was a disaster for the young city.

The day after the fire, Upham announced that he would rebuild his factories. Learning from the fire, the city required that new buildings on Central Avenue must be clad in fireproof materials - not wood. Reconstruction began almost immediately, with some businesses throwing up temporary wooden shacks in the street in front of their lots from which they could sell while their stores behind were rebuilt in brick. There never was another fire like that.

Many structures built right after the fire still survive, especially just south of the railroad tracks where the business district began. They include: 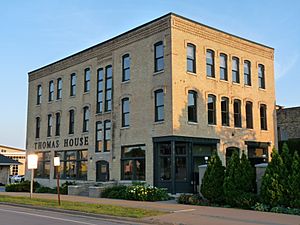 The east side of the 100 block is remarkably intact; almost the whole block was built right after 1887. Buildings in other places were also constructed right after the fire, but no longer exist. For example, the Wisconsin Central rebuilt its depot, but it burned in 1907.

With the rebuilding of Upham's factories, Marshfield had jobs and the town's economy moved forward. In 1890 A.K. Hatteberg from Upham's company formed his own veneer factory, which eventually became Roddis Lumber and Veneer. Other woodworking factories included H.H. Bille's Sash and Door and the Stave Factory. But the pine was running out, and things were changing. Upham's sawmill closed in 1899.

Local cheesemaking had begun in 1885 at Nasonville, and proved to be profitable, so other cheese factories began to pop up in the neighboring country. In 1907 the first cold storage plant was built in town. In 1911 the Blum Brothers began manufacturing cheese boxes. All of these, together with the rail connection, made Marshfield a hub for shipping cheese from the area to markets like Milwaukee and Chicago. C.E. Blodgett's Cheese, Butter and Egg Company became the largest firm of this type in the state.

While the structures built immediately after the fire were all Italianate-influenced, these later buildings are more varied:

The historic district also included some other buildings built north of the tracks in this era, which were razed in the 2000s for Veteran's Parkway and Kwik Trip. Most interesting was the Baumann Building at 101 N. Central, a 2-story Italianate with wide overhanging eaves built between 1891 and 1898, which housed a saloon and Saenger Hall, where the Marshfield Mannerchor met, and in 1915 the Deutscher Krieger Verein.

Beginning in 1914, Central Avenue was paved in brick from "A" Street (now Arnold) north of the tracks south to 9th Street. Around the same time, Central became part of Wisconsin's state highway system, meaning more traffic through town. By 1925 the town had 7,400 people and about 1500 cars. Various garages and service stations were built along Central Avenue.

The contributing buildings from this period are: 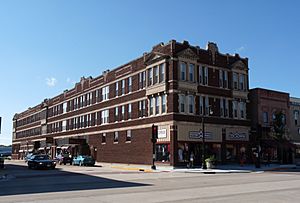 The Charles Hotel, shading 166 S. Central to its right

All content from Kiddle encyclopedia articles (including the article images and facts) can be freely used under Attribution-ShareAlike license, unless stated otherwise. Cite this article:
Marshfield Central Avenue Historic District Facts for Kids. Kiddle Encyclopedia.