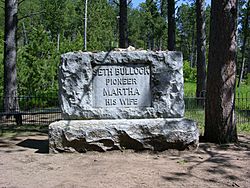 The headstone of Seth and Martha Bullock

Martha Marguerite Eccles Bullock (1851–1939) was an American pioneer woman who was the wife of Seth Bullock, one of the leading citizens in early Deadwood, South Dakota. She and Bullock were married in Salt Lake City, Utah, in 1874.

Martha Bullock and daughter Margaret were sent to live with her parents in Michigan in 1876 when Seth Bullock first left for Deadwood, then a wild lawless frontier town and no place for a family; after the town had become more orderly, largely as a result of the efforts of Bullock himself as sheriff, they joined her husband in Deadwood. She became a leading member of local society and excellently managed their household. They subsequently had another daughter, Florence, and a son, Stanley.

All content from Kiddle encyclopedia articles (including the article images and facts) can be freely used under Attribution-ShareAlike license, unless stated otherwise. Cite this article:
Martha Bullock Facts for Kids. Kiddle Encyclopedia.