The Masked Tree Frog, also called the New Granada cross-banded tree frog, or Smilisca phaeota is a frog that mostly lives in the tropical forests of Central and South America. They are called the masked tree frog because they look like they are wearing a black mask. The black mask covers their eyes, which helps them hide from predators. 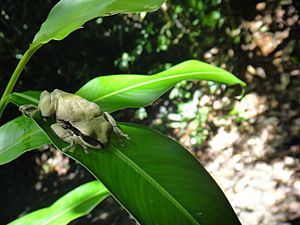 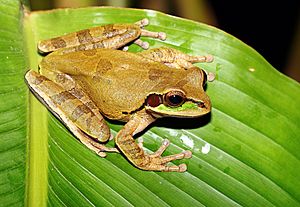 Masked tree frog, from the Osa Peninsula of Costa Rica

All content from Kiddle encyclopedia articles (including the article images and facts) can be freely used under Attribution-ShareAlike license, unless stated otherwise. Cite this article:
Masked tree frog Facts for Kids. Kiddle Encyclopedia.